Playing Roles or Having Roles in Plays: What are RPGs?

The Genesis of Tales of Arrissia

Today I am writing about the conception of Tales of Arrissia (ToA) and shed some light on my motivations for making the game the way it is.  ToA is a challenging affair, to be sure, and perhaps even a confusing one, at times. You’re the Hero, but you’re not very heroic. You get lost quite a bit. You don’t seem to make much of a difference – and wow do you learn things the hard way.

Now I’ll state upfront that I recognise that there are many exceptions to the examples I present below. I’ll also state clearly that I don’t think that the RPG genre has gone down the toilet, nor do I think that the way we define and categorise types of RPGs is bad. What I am presenting today are my thoughts on how I think that the RPG genre is often misunderstood, often to the detriment of potential new fans. I’ll also add that I’m a massive fan of all the kinds of games I describe below. My issue is not with the games, or their players, but rather the way that they are defined. I.e. I am a boring pedant. 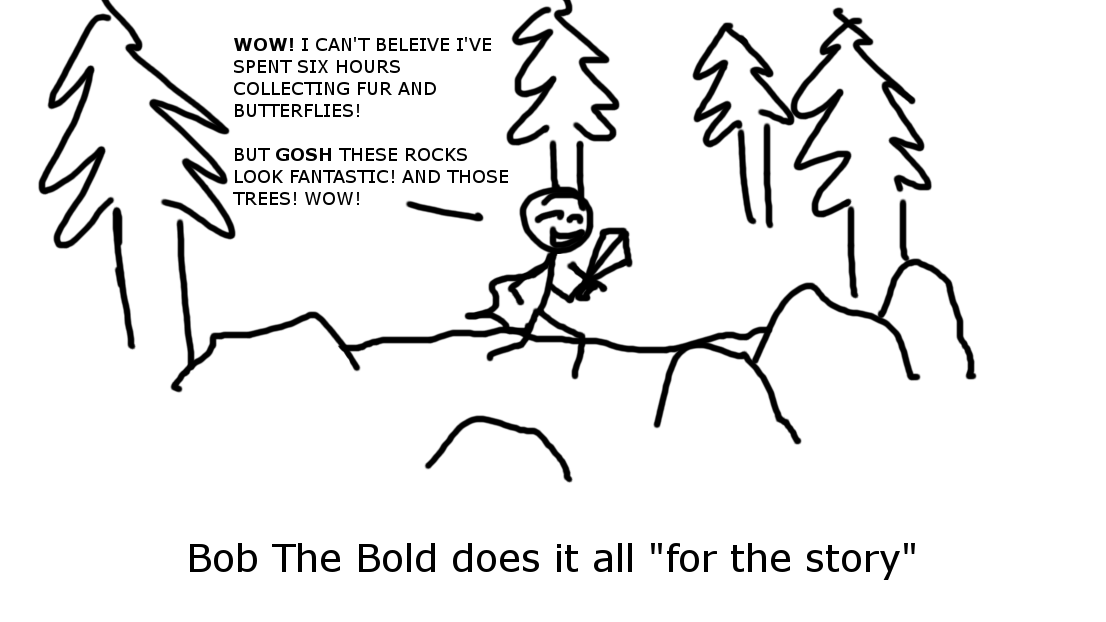 Running around, doing stuff. There - story!

A Consideration of Role-Playing Games

It is with a wry smile that I hear somebody tell me they don’t like RPGs. RPGs are games set within a story where you play the protagonist. They’re distinguished from other genres by the fact that their stories are more narrative in nature; there’s more than meets they eye (graphics) and the mind (mechanics). There’s something for the heart, too (namely storytelling). And we all like stories.

There’s something else at play here. I think that when people say that they don’t like RPGs, they really mean that they don’t like various aspects of what they see to mean RPGs. My humble submission is that the mechanics and presentation of RPGs have crept into the definitions of the genre itself. “Oh, it doesn’t have complex statistics mechanics and broody visuals? Well then it’s no RPG!” But then again, what about ARPGs? Some popular titles have story arcs that take all of two minutes to explain to someone. But they are still RPGs. That magical “A” in front sure has some strange effects indeed.

Let’s look at RPGs from another angle, the player’s perspective: 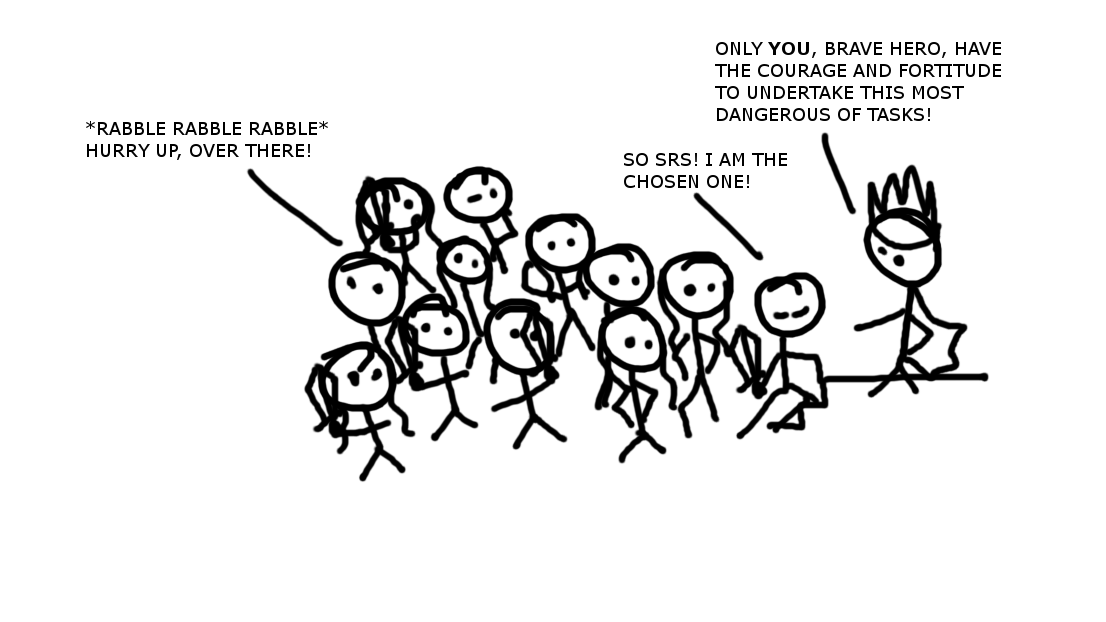 No two heroes are the same! Except for maybe... well, most of them.

So, what gives? Sally’s story doesn’t ever mention that she’s psychic or hallucinates, that her life is a breeze, and everything is just so obvious to her. Adam’s story is most certainly not about the daily trials and tribulations of being just one of thousands of Amazing Adventurer’s –  many of whom have had the same audience with the king and also own the Most Mythical Sword in All the Lands.

The difference between the way such games are presented to players and the way they’re played is oftentimes massive. You’re technically playing a role – sure – but are you playing a role any more so than in a first-person shooter? So then, what exactly makes RPGs RPGs? And what exactly do non-fans think RPGs mean? Considering this is what led me to design ToA the way I did.

Okay, Mr. Whiney-Pants, What’s an RPG Meant to be Like?

Don’t skimp on the storytelling, don’t make everything automatic, and try to present the world and experiences in the same way you communicate it to players. That’s it. Splendiferous graphics are more than welcome. Intricate character development and combat mechanics are equally welcome.

An example: if I spend all my time killing things for people whose names I never remember so that I will unlock some talent – or earn gold to get that some item – I’d argue I’m not really being told much of a story. I ask you, dear reader, wouldn’t it be strange if you watched a show, or read a novel, and just never remembered anyone’s name? What kind of story is that? I’m not saying that such games are bad (they’re not!), but rather that they’re not really stories. They’re just tied together in some coherent way.

Another example: if my memories of a game are largely of hours spent running around beautiful forests, jumping into crystal-blue lakes,  and scaling snow-capped mountains I’d argue that I’m basically playing a hiking sim. Yes, I have health and other statistics, but that just means that the hiking sim is more realistic. Hikers also lose health falling off mountains. Yes, maybe I’m doing different tasks for different people, as I run around the glorious plains, but I’m really just an assistant, or helper. 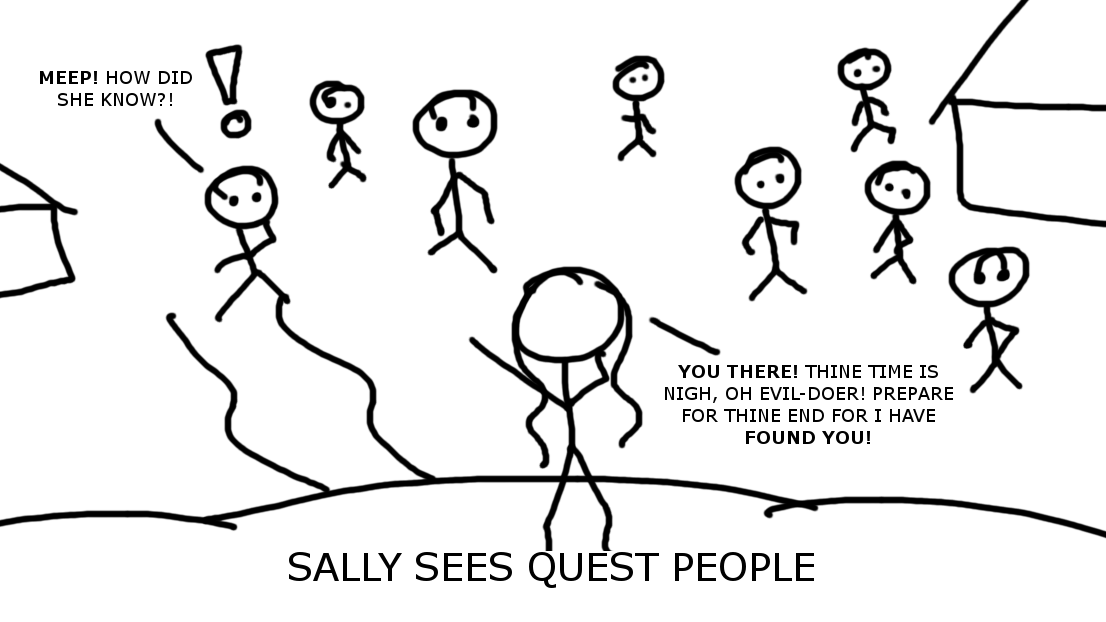 Brave and helpful, or freakishly psychic?

My goal with designing ToA was to create a world that doesn’t treat players like special heroes unless their characters actually are special heroes. I believe that if players are clicking on the quest markers, following the mini-map arrow, or employing the same rinse-and-repeat set of actions upon each encounter/village, then their actions and achievements are not really theirs. Yes, they ended up finding the sneaky thief, and getting that super-mythical weapon – but they were bound to do so. It was unavoidable. My point is that they’re not then really “playing the role”, but rather just being given a role.

So, I went old-school: inspiration one: Text Adventure games (or Interactive Fiction). Old-school inspiration two: Point-and-Click Adventure games. Text Adventure games  are constrained by the fact that they render only text to the player. Designers of these games wrote out every single detail for to the player. If there were trees yonder West, you read about it. Rock over there? Yup, you read it. That’s how worlds were built. The consequence being that the player ended up considering most everything, even if only to dismiss a lot of it.

Point-and-Click Adventures are like Text Adventures in this regard. They required the player to scan the current area and decide what looked interesting or useful. If it looked promising, they’d click it, intending for some sort of interaction to occur. Indeed, the older ones tended to require players actually select a “verb” and then click on the item of interest (e.g. click “pickup” then click on the gem on the ground). 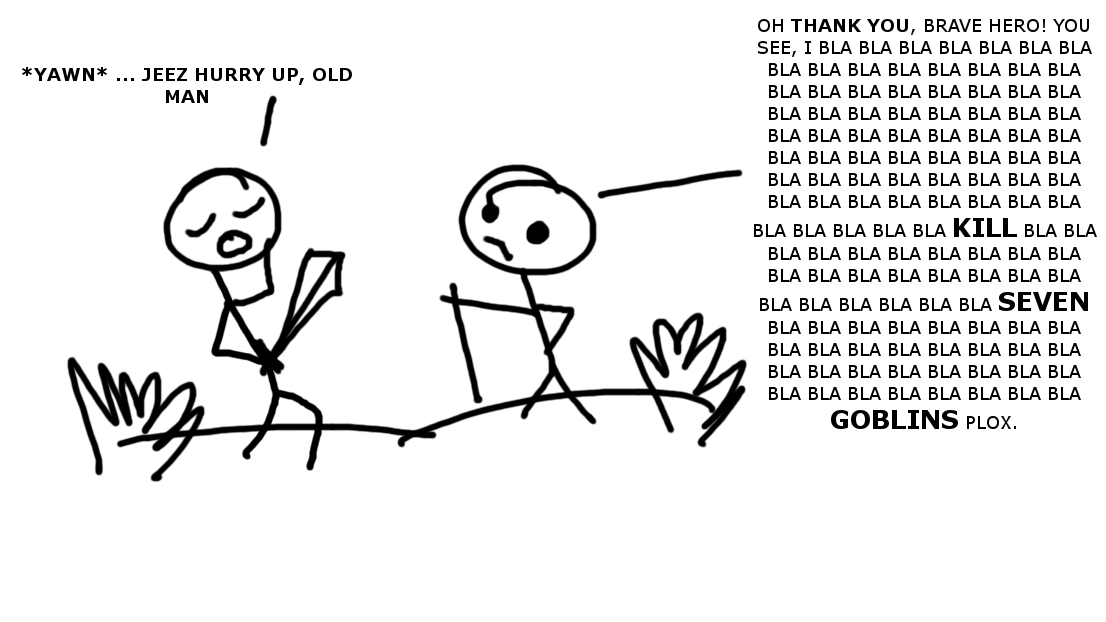 Most heroes, it turns out, are out for more than just helping people.

Enter Tales of Arrissia; a contemporary homage to these styles of game. Whilst players are not intended to consider every tree or rock they come across (please don’t!), they are intended to consider things that may be relevant like books and signposts. Such consideration goes hand-in-hand with curiosity; and thinking and curiosity compliment each other well. I feel that this is the core element of RPGs: presenting a world wherein the player explores not only its mechanics and surroundings, but also its ideas and stories – willingly and with interest.

To achieve this, I’ve eschewed repetitive and predictable elements. There are very few quests indeed asking you to kill so-many so-and-sos (and those that do are often very tongue-in-cheek). Instead, you’re presented with a world wherein you’re encourage to go find things out for yourself.  Much of the lore is presented in this way, by using interactable objects which present text when used. Navigation is mini-map free – the player must actually figure out how to get to places. Items and chests are scattered – quite often off the beaten track.

Such a game requires a lot of text or voice-acting. I am but a humble pixel wizard, without much gold, and so went with text. I realise this may seem intimidating – “Eek! Walls of text!” – which is why I presented much of the text in short-form messages. These are easier to digest and move on from. They also provide the player with more variety, as it allows for a lot of switching between different contexts.

Final Words and Things to Come

It would be disgustingly disingenuous to claim that ToA came out how it did only because of my feelings on RPGs. Other factors, many of them constraints, were involved as well. Time, gold, experience, and expertise chief amongst them. I will continue this series with a discussion on the major themes of ToA, and why they get to be the major themes. I’ll go over the game’s aesthetic, the choice of ARPG-style presentation, combat mechanics, and level design decisions. I will also address what I want players to get out of their experience playing ToA, as well as my reasons for omitting various contemporary bells-and-whistles.

Get Tales of Arrissia: The Demo

Tales of Arrissia: The Demo